Let’s have open Discussion on this Indian IT A

The first ever documented facts on freedom of speech were way back in 399BC when Socrates speaks to jury at his trial: ‘If you offered to let me off this time on condition I am not any longer to speak my mind… I should say to you, “Men of Athens, I shall obey the Gods rather than you.”‘ Cut two, 2015: Supreme Court struck down Article 66A and the freedom of speech and expressions prevails. Will it happen? Not until we decide to take care of the following:

Awareness of rights and responsibilities

So next time you are too excited to share your opinion in any of the public forums, keep the above in mind.

The bone of content during the recent petition filed was between the people exploiting their rights in uniform or position and the young innocuous people who are not even aware of the consequences of their remarks on the social networking sites. With the exponential rise in both, the cyberspace users and the cyber crimes in India, the government needs to have the proactive approach rather than reacting late. An annual training to all the stakeholders from the police to the investigators and courts must be made mandatory. Also, NGO’s, educators and cyber experts can be roped in to educate all the citizens in the responsible use of Internet of everything (IoE). A basic toolkit will also be a great idea that can be provided to all those involved in skill development programmes. Cyber literacy should be integrated into the curriculum rather than having the highest statistics in blocking the content and websites.

“It is clear that Section 66A arbitrarily, excessively and disproportionately, invades the right of free speech and upsets the balance between such right and the reasonable restrictions that may be imposed on such right. The definition of offences under the provision was “open-ended and undefined”. The information dispersed over the Internet need not be information which ‘incites’ anybody at all. Written words may be sent that may be purely in the realm of ‘discussion’ or ‘advocacy’ of a ‘particular point of view’. Further, the mere causing annoyance, inconvenience, danger, etc., or being grossly offensive or having a menacing character is not offences under the [Indian] Penal Code at all. Every expression used is nebulous in meaning. What may be offensive to one may not be offensive to another. What may cause annoyance or inconvenience to one may not cause annoyance or inconvenience to another.”
-Supreme Court (sic.)

At this hour in our country, if we talk about religious sentiments, politically-driven agendas, hatred for certain celebrities for varied reasons etc all, the netizens express their opinions about the aforementioned and it might be liked or disliked by an individual. However when does that opinion become an offence, is something to ponder upon. The definition of ‘grossly offensive’, ‘annoyance’, ‘danger’, etc. with respect to the cyber world needs to be charted out in detail in our legal dictionary. Decoding the constitution will pave the way to less or negligible misuse of law. 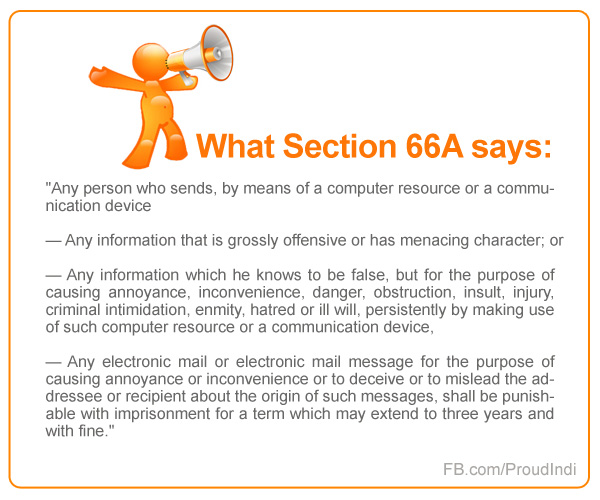 Establishing the stratum of intelligentsia

The explosion of cybermedia is waiting so we better be prepared and preventive for it! A panel of the intelligentsia- cyber forensic, cyber law, cyber security experts; psychologists; policymakers; educators are our prevention kit. The rate at which our technology is updating, the blaze at which we are exploring the cyberspace and the reach it has and will have; our laws and ideas need to catch up, update and review itself periodically.

Let’s not forget that “Early bird catches the worm”.

Popular posts from this blog

Let’s all be human first and not men and women !

“Women Empowerment”, the very topic has been discussed so much in almost every forum and every possible live event that it seems a challenge to write something new and relevant on it.Hence, it’s human empowerment for me. Surprisingly, as per Old English Etymology, the word “man” means “a thinker” or “to have a cognitive mind” and it was used with no reference to gender, i.e., for male and female both. As the civilizations changed, the meaning changed too and today we use men and women, male and female etc. to categorize the humans. It is important for me to refer to these details because the premises on which I am proposing the ideas of women empowerment solely lies on it. What do we have achieved so far? After 68 years of independence, we do have the framework and constitutional rights in place for women to ensure the upliftment and better life for them. The only place we lack is the implementation of the same to every nook and corner of India. The challenge also lies in being the l
Read more

Role of education in national development

Education has been recognized as the most powerful and vital tool for India’s development. Various researches both at national and international levels have proved that education significantly contributes in social and economic advancement of a nation. Today, India needs to overcome many obstacles to achieve its goal of becoming the new superpower. A pool of educated and empowered citizens will drive the country towards the realization of this dream. Role of Educational Policies to Grapple Global Challenges The world is at the threshold of breakthrough innovations and prominent technological expansion. The credibility of Indian educational policies has been a subject of debate both at a social and economic level for over a decade now. As a result of such debate, important amendments have been made and new systems have been introduced to ensure that education reaches to all the levels of the society. Government Initiatives for One and All The Indian Government has done commendable job
Read more