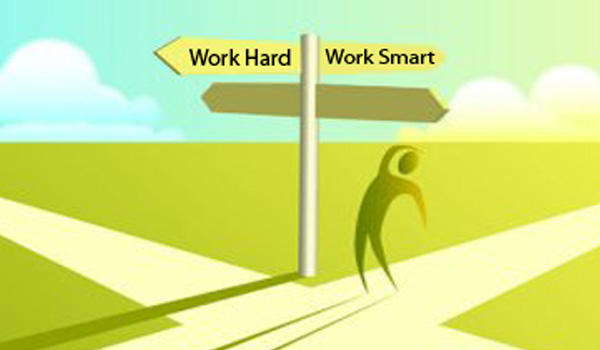 How long we have been hearing this statement from almost everyone around (SAVE the Grandparents,) , from even those who are below average themselves, everyone seem to mouth this SO CALLED REVOLUTIONARY  Adage and defends its honour vehemently.

Probably even you might belong to the Majority who sermonizes the same, but here is the thing, Did you ever wonder, that this might be the creation of a person who had a Chemistry Exam the next day & He had a misconception that it was Calculus, so he kept studying calculus and therefore flunked in Chemistry? Subsequently he had a Eureka Moment and he mouthed this phrase that Work Smart (i.e. Plan & Check the Ground-rules before entering the battlefield) instead of hard.

Work Smart is a what I would call a fancy term for Planning & Work Hard is the pseudonym to refer to the amount of efforts you put in, So WORK SMART NOT HARD Ideally & Correctly SHOULD mean that “before you put in the efforts you should have the vector route with you & not a zigzag pathway that consumes more time & Efforts”.

As General Tsun Zu said “Know thy Enemy and you have won half the battle” so working smart is gathering as much information as you can about what you are supposed to do?  & THEN going ahead and pooling in your efforts.
A Successful/smart/accomplished person is someone who spends atleast 1/3rd of the time in planning, strategizing and accruing comprehensive information on what to do,  because it is then only that his inputs will yield the maximum results.

It is analogical to Preparing for a competitive exam and being well aware of its pattern and how it is different from other similar ‘looking’ exams, for example for MBA Entrance exams CAT is a speed + Accuracy based exam where you still have 140 seconds per question BUT for Exam like IRMA you have less than 60 seconds per question and for another NMAT you get 60 second per question BUT there is NO Negative marking, so smart work would be to attempt all the questions(& Solve those questions first that are simpler or belong to your forte), while hardwork would be to attempt each question BUT with extra diligence which would result in much lesser overall attempt.

SO Hardwork is Vital in both the cases, you can’t ignore to put in the requisite amount of efforts in the questions from the areas you are good at, since you can’t afford to get them wrong, while smartwork is to attempt those first which are less time consuming & attempt each question marking an option with calculated intelligent guess.

Similarly when applying for a Job, smartwork would be to edit and modify your resume & cover letter to be in sync with company’s expectations & criteria, you may have all that but you need to research about all of them and put in the keywords that appeal to the HR of that particular company.

SO We see SMARTWORK & HARDWORK Are NOT independent, they are a complimentary pair, you can’t survive on either one of them alone, unlike the widespread notion that Smartwork alleviates the need for HARDWORK, smartwork actually streamlines the domain for Hardwork & makes your effort more focussed/laser like with little or no attenuation towards something not rewarding.

NO matter how smart you are, you will have to go that extra mile to achieve the extraordinary. Smartwork will just ensure that you go that mile in right direction with the right mode of transportation.

So Next time when someone says to you ‘Dude, it’s Smartwork that matters, not Hardwork’ you know that person has accomplished nothing significant to have NOT Realized the flaw in this Hackneyed Cliche.

Popular posts from this blog

Let’s have open Discussion on this Indian IT A

The first ever documented facts on freedom of speech were way back in 399BC when Socrates speaks to jury at his trial: ‘If you offered to let me off this time on condition I am not any longer to speak my mind… I should say to you, “Men of Athens, I shall obey the Gods rather than you.”‘ Cut two, 2015: Supreme Court struck down Article 66A and the freedom of speech and expressions prevails. Will it happen? Not until we decide to take care of the following: Awareness of rights and responsibilities We all know that the rights and responsibilities are the two sides of the same coin. Before demanding for your rights as the citizens of a country, one must abide by the rules too. While the article 19(1)(a) does gives us the right to freedom of speech and expression, it also has the conditional clause of “reasonable restrictions” under Article 19(2) of the Constitution of India, on the exercise of the right to freedom of speech and expression on the following grounds: • Security of State • F
Read more

Let’s all be human first and not men and women !

“Women Empowerment”, the very topic has been discussed so much in almost every forum and every possible live event that it seems a challenge to write something new and relevant on it.Hence, it’s human empowerment for me. Surprisingly, as per Old English Etymology, the word “man” means “a thinker” or “to have a cognitive mind” and it was used with no reference to gender, i.e., for male and female both. As the civilizations changed, the meaning changed too and today we use men and women, male and female etc. to categorize the humans. It is important for me to refer to these details because the premises on which I am proposing the ideas of women empowerment solely lies on it. What do we have achieved so far? After 68 years of independence, we do have the framework and constitutional rights in place for women to ensure the upliftment and better life for them. The only place we lack is the implementation of the same to every nook and corner of India. The challenge also lies in being the l
Read more

Role of education in national development

Education has been recognized as the most powerful and vital tool for India’s development. Various researches both at national and international levels have proved that education significantly contributes in social and economic advancement of a nation. Today, India needs to overcome many obstacles to achieve its goal of becoming the new superpower. A pool of educated and empowered citizens will drive the country towards the realization of this dream. Role of Educational Policies to Grapple Global Challenges The world is at the threshold of breakthrough innovations and prominent technological expansion. The credibility of Indian educational policies has been a subject of debate both at a social and economic level for over a decade now. As a result of such debate, important amendments have been made and new systems have been introduced to ensure that education reaches to all the levels of the society. Government Initiatives for One and All The Indian Government has done commendable job
Read more